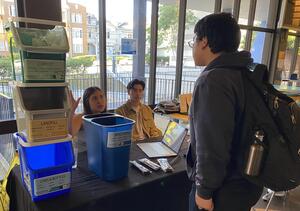 At first glance, it may seem like a strange sustainability initiative to increase the size of waste bins in the student dorms at UC Berkeley, but a successful pilot program has recently proven otherwise.

Proper waste sorting has been an ongoing issue that Berkeley has been trying to tackle. Last year, Grace Martin, a recent 2021 graduate, performed waste audits at one of the campus dorms as research for her thesis on whether an educational intervention would have an impact on students’ waste sorting habits. Martin’s research revealed there were no significant changes in sorting after the implementation of an education program. The results signaled there were other barriers residents were facing.

“[This] really lit a flame under my department to look at the infrastructure in which we are providing students opportunities on how to sort their waste,” explains Sustainability Coordinator Samantha Lubow.

Lubow realized that it was not a lack of awareness but an inconvenience that was preventing students from participating in proper waste sorting.

The previous residential waste disposal system consisted of a mixed paper bin with a small landfill section and a separate compost bin for each room. In addition, one important revelation from the study was that students no longer had as much paper to recycle because they now mainly rely on electronic copies.

“What we also noticed, especially after the pandemic, is that takeout containers needed to be able to fit in the bins and the old bins were not large enough,” explains Lubow. “Although we use reusable containers in the dining hall, we can’t deny that students are still going out to eat. Our study showed a bulk of the waste was coming from takeout containers.”

This fall, new bins were placed in all Unit 3 and Beverley Cleary residence rooms as part of the pilot program launched by Lubow’s team. Through support from Pepsi, they were able to purchase 600 new bin sets. The new system eliminates the size limitations from the previous system to help address proper sorting habits so the campus can divert as much waste from landfills as possible.

The pilot bin set consists of a larger compost, cans and bottles, and garbage bins stacked together in a tier to meet the updated needs of residents. The design not only fits better with the students’ lifestyles but also accommodates for the limited space in dorm rooms.

The team also created a waste sorting guide that was distributed to residents. The guide provides details on how to properly sort waste. In addition, updated sorting information was provided to students during Golden Bear Orientation. 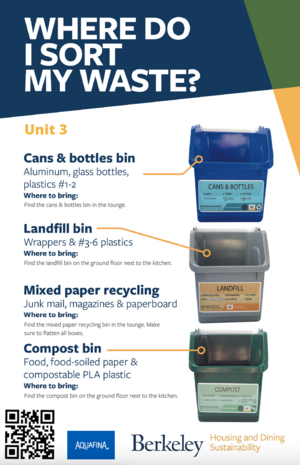 Following the success of the pilot program, Lubow’s team has already purchased new bins for university-owned apartments and plans to implement the bins across all student housing by next fall.

“The UC System is really setting the standards for higher education and the industry for strict sustainability goals,” says Lubow. “We are working with limited resources to support these goals, so [campus] partners have the opportunity to work with our institution and our students.”

The support of on-campus partners, like Pepsi, that hold a shared interest in sustainability can help make campus goals and initiatives possible. Pepsi is not new to supporting UC Berkeley’s sustainability programs. In the past, the company has provided recycling bins and support for various sustainability-focused initiatives with Cal Zero Waste and Cal Athletics. The company also recently launched pep+ (PepsiCo Positive), a strategic end-to-end transformation to “drive positive action for the planet and people.”

“Gen Z will become our planet’s largest generation and is full of our future leaders, so it is critical that we give them tools and knowledge to understand how they can accelerate,” affirms Pepsi. “Having partners like UC Berkeley that share a similar vision is critical; neither partner can do it on our own, we must and will partner to build a better future.”